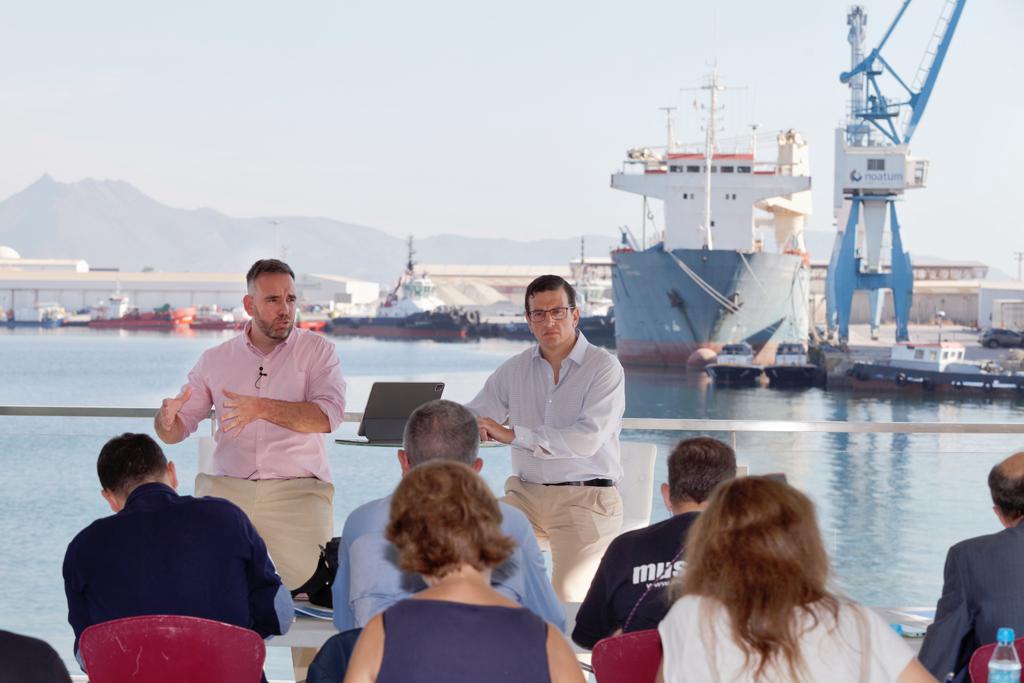 The president of the Port Authority of Castellón, Rafa Simó, today took stock of his two years in office at the head of this public body, and reviewed the eleven projects that will make PortCastelló a more competitive and efficient port, at the service of its customers, open to citizens, socially and environmentally committed to its surroundings and to the development of productive infrastructures that will be possible due to investment capacity.

This was stated in an appearance before the media accompanied by the director of the port, José María Gómez, held at the Escorpa Club, where the PortCastelló Strategic Plan was presented as a roadmap for the 2024 horizon and which is based on three fundamental pillars: social, environmental and economic sustainability.

In social sustainability, Rafa Simó has listed the actions carried out to revitalize and improve the maritime façade, such as the activation of the Al Port project “to generate a culture that this port belongs to everyone”, the development of activities to commemorate the V Centenary of the first trip around the world, and the execution of works for the integration of the port with the city. “We will continue to invest in the public area,” said Rafa Simó, who has announced that the procedure for the purchase of the former Navy Command building, which is located on Paseo Buenavista, has begun for 600,000 euros. “This is how we fulfill a demand from Graueros and Castellón residents so that this property has a use”.

It has also announced a Dynamization Plan for the fishing sector because “the Port Authority has a moral duty to this sector and we want to be part of the solution to its problems through the preparation of spaces, the adaptation of concessions to current needs and the study of possible complementary activities that add value to the Grau product”

It is a strategic alliance, along with others such as the SmartPorts chair that will be promoted jointly with the Universitat Jaume I. He has referred to the Social Welfare Committee which, after its constitution this year, has now marked out a line of work to “Improving the day-to-day life of seafarers and those who work in the port”.

In environmental sustainability, the president of the Port Authority of Castellón has also referred to the signing of a pioneering agreement signed with the Consell for the improvement of air quality in the port environment, and has highlighted the private sector’s commitment to improve and protect the environment. In this regard, it has announced that the two terminal companies that operate in the Cerámica wharf, TMG and Noatum, will undertake investments this year that will serve to introduce improvements in environmental protection, infrastructure, mechanical means and high-performance unloading .

In economic sustainability, the president of PortCastelló has offered the freight traffic data so far this year. Until the month of August, the port of Castellón has exceeded 14.7 million tons, which is 8% more than the same period of the previous year. The main driver of this traffic has been solid bulk. “These figures should not lead us to triumphalism, because the last quarter of the year is expected to be complicated by the current geopolitical situation and inflation.”

Rafa Simó has valued the “work of the APC human team to turn forecasts and plans into facts and realities”, referring to the fact that 87% of the 17 million euros of investment planned for this year have been awarded by the Port Authority. He has also listed the economic milestones at the end of the first half of 2022: turnover increases by 8.9%, EBITDA by 5.6%, Cash Flow by 15.3%, and debt decreases by 8, 7 million.

The connectivity of PortCastelló has focused part of the balance of the president of the Port Authority of Castellón, who has stated that “we are in a historic year because the Spanish government has shown its firm commitment to this territory by approving European funds for southern rail access .

Rafa Simó has also announced that the connection between the two docks of the port of Castellón will finally be carried out by means of a road bridge, after the tender for the railway bridge was deserted due to the rise in raw materials that made the initial project more expensive by 7 million. He explained that this increase “prompted us, on the recommendation of Puertos del Estado, to carry out a feasibility study that concluded that a road bridge is more operational, it is the best way to unite the two docks and operationally convert what are now two ports into one. ”. He has highlighted that “we also took the pulse of the port community and most saw this alternative with good eyes”.

The head of the public body has highlighted the progress of the Octopus project, which aims to gain 420,000 square meters from the sea, generate 866 linear meters for new berths in the south dock and obtain new port space. “It will give the final boost to this dock, will allow the implementation of new industries and will generate more wealth in the environment.” The closure project will soon be awarded, the first step to establish the new coastline and reclaim land from the sea.

Rafa Simó has referred to the PortCastelló 2030 Challenge, which foresees in that horizon reaching 30 million tons per year, 30 million from outside investment, developing 30 social projects, consuming 30% less energy and reducing emissions by 30%. . “Our data shows that we are on the right track to meet this challenge.”

Rafa Simó has concluded by assuring that “we will continue working to build a better future, in which the port has much to contribute, to consolidate our position as the ninth port of the Spanish port system and the second in solid bulk, to be an efficient tool for our clients and the best neighbor of our neighbors”.