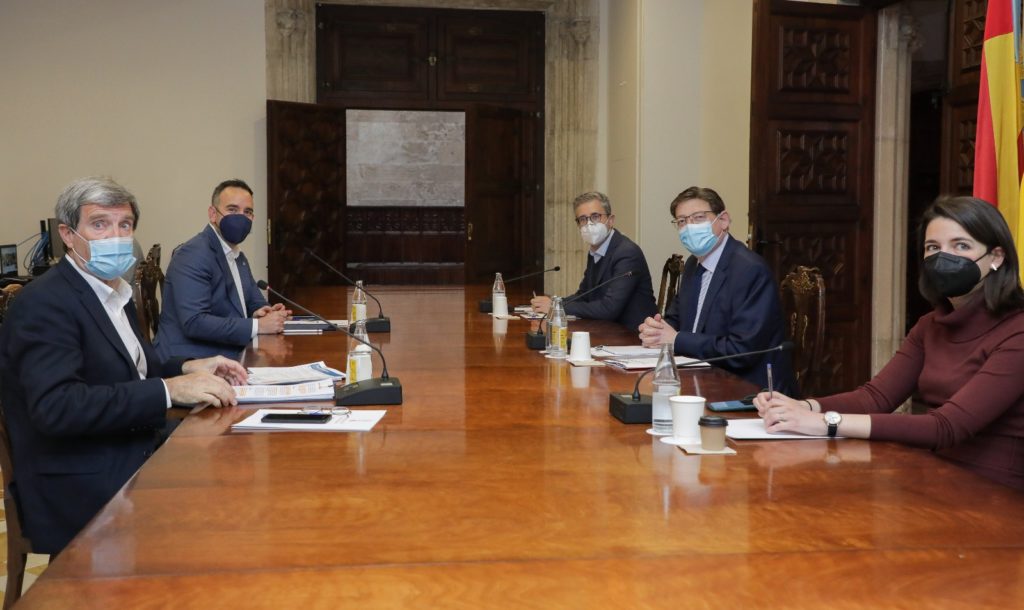 The ports of València, Castellón and Alicante will invest 146 million euros in 2021, which represents 14.6% of the total investment of the ports of Spain

The Valencian ports have committed to allocate part of their profits to the cities of which they are part, being the first ports in Spain to invest in their area (Valencia)

The president of the Generalitat, Ximo Puig, stressed that the ports of the Valencian Community constitute a “powerful economic engine in times of crisis”, which also promote “employment-generating investments”.

This has been stated after the meeting with the president of State Ports, Francisco Toledo; the presidents of the port authorities of Valencia, Aurelio Martínez; from Castellón, Rafael Simó; and from Alicante, Juan Antonio Gisbert, and the Minister for Territorial Policy, Public Works and Mobility, Arcadi Spain.

During the meeting, in which the weight of the Valencian ports in the Spanish port network was evidenced, it was announced that the ports of València, Castellón and Alicante will invest in 2021 a total of 146 million euros, an amount that represents 14.6% of the total investment that the ports of Spain will carry out.

The head of the Consell has explained that the Valencian ports are responding “much better” to the economic crisis caused by the pandemic than those of the rest of the State, with figures that improve the average of the ports of Spain, both in traffic and economically.

Likewise, it has ensured that most of the Spanish ports have closed the 2020 financial year with losses, while the Valencian ports have done so with benefits. Specifically, he referred to the 13.3% increase in exports from the Port of València between the months of January and February, “which clearly indicates how exports are pulling the economy and shows the strength of this decisive sector of the Valencian economy at a time as complicated as the current one, promoting sectors such as ceramics and agri-food, “he said.

Increased linkage of ports with their environment Beyond the strictly economic aspect, at the meeting the president has asked the Valencian ports to carry out a “better integration between the port facilities and the city, to increase and strengthen their relationship with the environment, sharing its benefits with society. “.

In this sense, the Valencian ports have committed to allocate part of their economic benefits to the cities of which they form part and to become involved in their environment, being the first ports in Spain to invest in their area.

Finally, the president has pointed out that this commitment of the ports translates into an investment of 15 million euros destined to the regeneration of the coastline, mainly the beaches of southern Valencia but also on the southern coast of Gandía, as well as in Castellón and Almassora. In addition to these regenerative actions, the ports will participate by investing, together with the Generalitat, in fundamental mobility infrastructures, such as the extension of Metrovalencia line 10, which will connect Nazaret with the rest of the network in the Grau de València area. ; and the project for the Turia River Mouth Park, next to the L10.