Operation directed by the General Directorate of the Merchant Marine 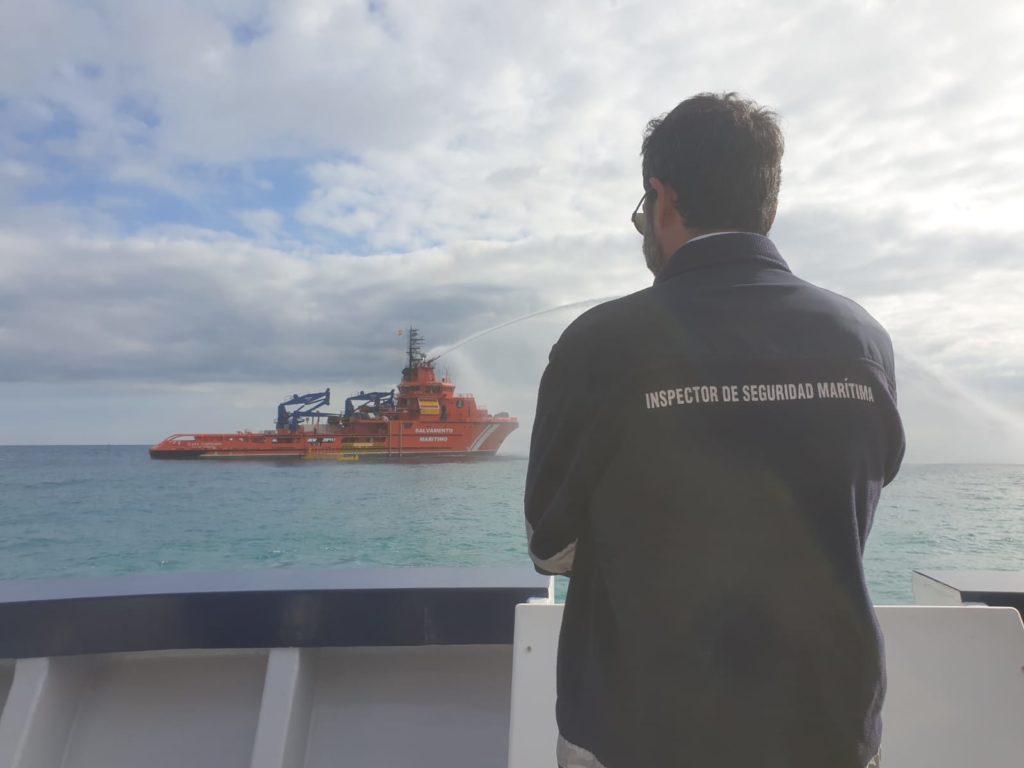 Mitma leads the PolEx 2021 maritime emergency drill that, for the first time, includes a chemical spill

In this exercise of international scope and simulation of a real response, a wide maritime and air operation of Maritime Rescue has participated, which has been joined by means of the European Maritime Safety Agency, the Civil Guard, the Red Cross of the sea, the service of customs surveillance and tugboats of the port of Castellón.

A collision has been simulated between a gas carrier, which has caused a controlled chemical leak and a spill of fuel oil into the sea, and a bulk carrier, which suffered slight damage.

The general director of the Merchant Navy, Benito Núñez, director of the emergency, activated the National Maritime Plan (PMN) to respond to the contamination of the marine environment in situation 2

(Mitma)The Ministry of Transport, Mobility and Urban Agenda (Mitma), through the General Directorate of Merchant Marine (DGMM), has directed the maritime emergency drill PolEx 2021 (Pollution + Exercise) in which, for the first time, it is included a chemical spill and where more than a hundred professionals have participated.

In this exercise of international scope and simulation of a real response, a wide maritime and air operation of Maritime Rescue has participated, which has been joined by means of the European Maritime Safety Agency (EMSA), the Civil Guard, the Red Cross of the sea, the customs surveillance service and tugboats of the port of Castellón, among others.

A collision has been simulated between a gas carrier, which has caused a controlled chemical leak and a spill of fuel oil into the sea, and a bulk carrier, which suffered slight damage.

The general director of the Merchant Navy, Benito Núñez, in charge of directing the operation, has stated the importance of this type of exercise for the coordination of all the agents involved and to verify that the procedures and equipment used in the operations are effective and give an optimal response in terms of maritime safety and the fight against pollution.

On the other hand, the director of Maritime Rescue, José Luis García Lena, has highlighted the excellent work of the Maritime Rescue professionals who guarantee safety in the fight against pollution. Every day a marine surface greater than that of the entire Spanish territory is monitored. Specifically, in 2020, 226 million km² (an area equivalent to 447 times the national territory) were monitored.

This is not the only drill run by the DGMM, which has among its powers the direction of prevention and fight against marine pollution and the control of the safety of navigation and the rescue of human life at sea. Throughout the year dozens of exercises to combat pollution and rescue and salvage are carried out on the Spanish coast, carried out by Salvamento Marítimo in collaboration with other operations of national, regional and / or local institutions.

The objective is always multiple: to improve the training of the crews, evaluate the ability to coordinate and respond to different events and that the response groups become familiar with the handling of equipment and with the techniques used to deal with real episodes in the best possible way. emergency at sea.

On Wednesday, November 17, one mile from the mouth of the port of Castellón, the Alexandra TI bulk carrier, bound for Marseille, makes a change of course and collides with the gas tanker Gas Link, while entering the port. The bulk carrier has hardly any damage to the bow, but the gas carrier is seriously affected by the collision: there is an injured person who requires evacuation and, in addition, damage to the hull at the height of a fuel oil tank, causing a spill to the sea. The next day, in addition, there is a controlled release of ammonia into the atmosphere.

This is the setting for the PolEx 2021 exercise to combat maritime pollution, international in scope and with real maritime means, which began yesterday, the 17th, and ended at noon in Castellón, directed by the General Directorate of the Merchant Marine and executed by an operation of more than a hundred people, between maritime and air resources, coordinated by Salvamento Marítimo.

This scenario has required activating the National Maritime Plan in situation 2 to face the emergency. Furthermore, it is the first time that a PolEx exercise simulates chemical contamination.

During the exercise, developed over two days, Salvamento Marítimo has deployed anti-pollution equipment for the collection and containment of the hydrocarbon, with the intervention of the vessels Clara Campoamor and Marta Mata and Salvamar Sabik, supported by the helicopter Helimer-211, which has carried out monitoring and tracking of contamination. Maritime media from other institutions and entities have also participated in a complementary way, highlighting the intervention of the ship Monte Anaga, from EMSA.

The collection and containment media used in the drill have directed efforts to reduce and eliminate fuel oil contamination and ammonia leakage. In the case of chemical contamination, work has been done with the means of the damaged ship itself, in collaboration with the port tugboats, through the abatement system (dissolution by means of massive contribution of water). For the fuel oil stain, simulated by means of popcorn, barriers and skimmers (hydrocarbon collection system) have been deployed.

The drill has also included a rescue exercise to evacuate the injured crew member by helicopter and their subsequent transfer to a health center.

We attach images and video of the PolEX 2021 exercise