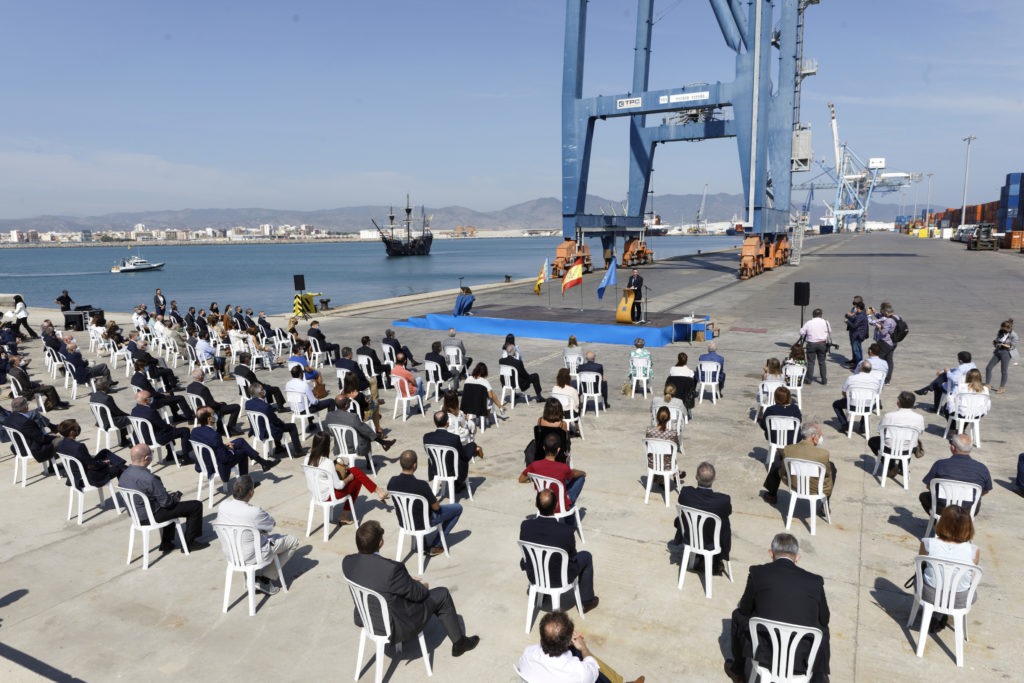 Around a hundred institutional, business, union, university and Port Community representatives attended the event that took place for the first time inside the port area to make visible the importance of PortCastelló as an economic engine and generator of employment in the province of Castellón.

In fact, Rafa Simó began his speech by recalling the origins of the port of Castellón in 1865, when a group of businessmen and politicians claimed to Queen Elizabeth II the need for a port to serve the citrus sector. “Only the collective effort generates great projects and makes them a reality and today we are facing a port of opportunities and which ranks ninth in the Spanish port system” of the 46 ports of general interest.

The president of the Port Authority has emphasized the need for all administrations “to work together so that PortCastelló is even more competitive and becomes not only the port of the province, but also that of its closest hinterland”, in reference to Aragon and Madrid. Along these lines, Rafa Simó has advanced that “we will claim what is fair for profitability and its cargo traffic for this port and also what we need to place it among the best connected in the system”, in reference to the railway projects that will provide PortCastelló with optimal connectivity, such as the southern accesses and the connection between the docks.

In this sense, it has shown its confidence that the Reconstruction Plan promoted by the Government of Spain takes these investments into account “to advance deadlines.” However, he has clarified that “in any case, PortCastelló has a roadmap that is set out in its productive investment plan”.

Rafa Simó has also advanced that he will demand that the State Ports Public Organization move up the group within the Spanish port system “on its own merits, because we meet the requirements and in recognition of a job well done.” In addition, he has requested “sensitivity in the valuation of the IBI of the port” to the Castellón City Council.

In his speech, he referred to PortCastelló as a port of opportunities and the south dock as one of the priorities in his management. “The projected infrastructures, both public and private, will culminate a strategic space next to the future logistics platform and the intermodal station, and will allow us to continue growing in a sustainable way.”

The president of the Port Authority has advanced the three fundamental pillars on which he will base his government action, and which go through enhancing the role of the port as a catalyst for the Castellón economy, promoting an environmental culture that allows sustainable growth, and strengthening the port-province relationship to establish a feeling of belonging.

Rafa Simó closed his speech with a few words of gratitude to the Port Community “for receiving me as they have done”, to the vice presidents Sebastián Roca and Miguel Ángel Gómez for their work at the head of the institution until their appointment, and to the director Ana Ulloa for the work done “especially in times as difficult as those imposed by COVID-19.”

He has had words for his predecessor in office, Francisco Toledo, “because thanks to his work, PortCastelló is in the Top10 of the ports of the State, it is a port that is increasingly closer to citizens and for making the transition so easy.”

Finally, he wanted to thank the president of the Generalitat and the Minister Arcadi Spain for the trust placed in him to “develop this tremendous challenge”, and the mayor of Castellón “for getting hooked on public service and then giving me the confidence to grow”