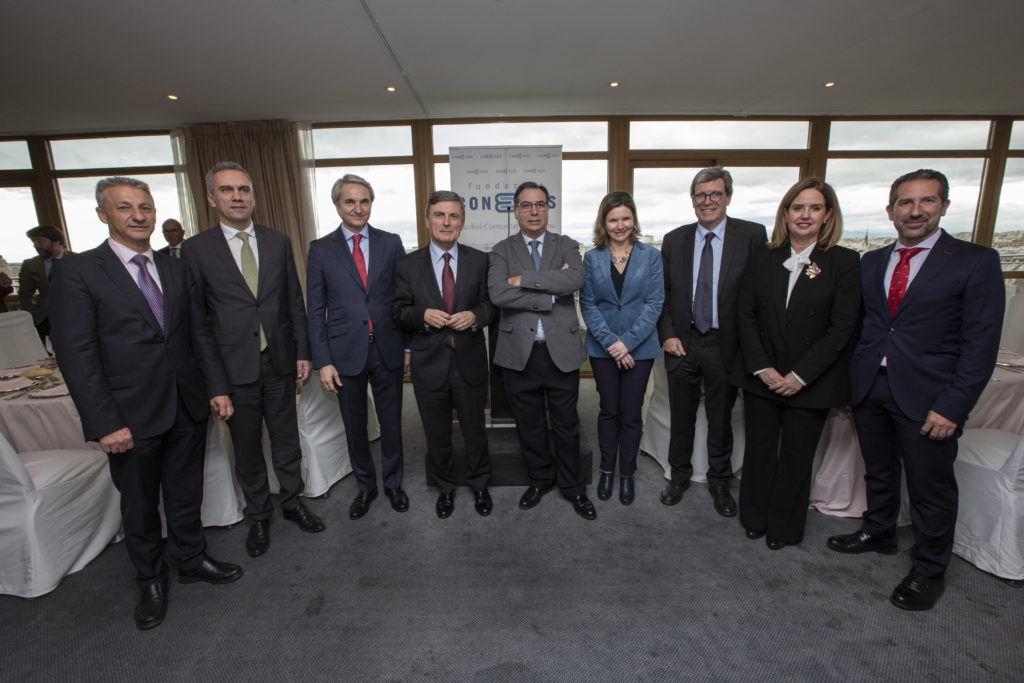 The president of the Port Authority, Francisco Toledo, emphasised that “ports play a key role in the circulation of goods traffic by railway given that 80% of imports and 60% of exports go through ports”

The Conexus Foundation has organised a conference in Madrid where it was made clear that for Spanish companies to by competitive it is crucial that the amount of goods being transported by rail must be increased so that it reaches the European average, such as the Cantabrian-Mediterranean and Mediterranean corridors, caccording to the President of Conexus, Manuel Broseta.

This meeting, which was organised in collaboration with the business groups Aragonex and CEV, was attended by the Secretary of State for Infrastructure, Pedro Saura, the Presidents of the Castellón and Valencia Port Authorities, the president of the Commission for Infrastructures of the CEV, José Luis Santa Isabel, and the president of Conexus, Manuel Broseta; and a group of business people from Aragón, Madrid and Valencia.

The president of Conexus, Manuel Broseta, explained that the objective of the conference was to search for possible and real synergies between the regions of Aragón, Madrid and Valencia, which are closely related and which can foster their economies an companies by working in a more closely coordinated manner.

The Secretary of State for Infrastructures, Transport and Housing, Pedro Saura, stated that he considered, “that it was vital for the Mediterranian – Cantabrian corridor to be working with optimum efficiency as soon as possible.” Therefore from the point of view of the central government, “we are working with European authorities to create the conditions whereby this corridor may be financed with European funds in the period 2021 to 2027….given that important statements have been made by European authorities accepting this corridor as their own.

Saura emphasised that “ in the budget proposals currently before Congress, which reflect the governments wishes for this routes, the Mediterranean Corridor receives an increase of 90% and that which connects this route with the Atlantic, not counting the Basque section, increases 80% if we compare it with the previous year.

The Secretary of State, who also recalled that the investment budget for the Grupo Fomento for 2019 will be increased by 27% and emphasised that investment in infrastructure is a ‘a great way to boost the Spanish economy’. “We understand that more needs to be invested, that everything needs to be better connected in order for   this to become the means by which we achieve the objective of sustainable mobility.”

As he spoke of the need to make the investments necessary to achieve these objectives, Saura also announced that “we are working on the Law of Sustainable Mobility which we wish to put before Parliament. ”

The president of the Commission of Infrastructures and the Valencian Confederation of Business (CEV) Jose Luis Santa Isabel said that “The Cantabrian Mediterranean Corridor will connect the Atlantic and Mediterranean corridors and will make us more competitive, it will connect important logistic and industrial areas with the Mediterranean ports and the Cantabrian coast, it will encourage the use of the railway network for goods transport; it will make regions better connected, it will make passenger transport more environmentally friendly and stimulate economic activity, that is more companies and more employment, greater integration of Spain with Europe, and Europe with the Spanish Mediterranean, increasing company activity in both Europe and Spain. The investment required will provide rapid returns for the regional economies involved and the rest of the country.

The president of the Port of Castellón, Francisco Toledo, recalled that Spain is way behind in terms of the transport of goods by rail, only 5% of land transport, while the average in Europe is 18%.This enormous difference results in higher logistics costs , higher energy costs, higher consumption of petrol and diesel, greater environmental impacts which sooner or later have a negative impact on transport.

For Toledo “ports are the key to goods transport by rail since 80% of imports and 60% of exports go through ports. The Cantabrian -Mediterranean and Mediterranean corridors are key factors if Spain is to reach the European average and will permit a big increase in traffic. For these reasons PortCastelló is making a great effort with its rail connections with a proposed budget of 60 million euros.

The Port of Castellón, which is very competitive in bulk solids traffic, now in fourth place in Spain, exports to Mediterranean countries, to the Black Sea, the Red Sea , the Persian Gulf and Africa, companies from Aragón which import and export will increase their capacity to compete with a better rail connection.

The President of the Port of Valencia, Aurelio Martínez, put before the meeting that the principal logistics node of the Mediterranean – Valencia – should be connected to one of the principal logistics nodes of the north – Zaragoza. This would strengthen economic activity and logistics potential in both regions, as well as helping to overcome the commercial inequality that exist between the third and fourth cities of Spain which is the result of the deficient rail connection.

According to Martínez “we wish to become Aragón’s port on the Mediterranean and therefore we want to be able to compete on equal terms with other ports and Aragón should be allowed to choose which option it considers best. Let us establish a basis for a mutually beneficial collaborative relationship…..Connecting to new markets allows us to improve our inter-oceanic connections and gain critical mass. For Aragón, it means gaining a new natural access to the sea, something that has been sought after from the beginning of the 20th century.”

Aurelio Martínez explained that over the next fifteen days plans will be made, “for the extension to the northern area and we expect to have approval by the end of the summer. This will mean an investment of 1,2000 million euros of public and private investment and will expand the capacity of the port by 5 million. The access to the northern area is an inseparable part of the project, and an integral element in the proper development of the logistics areas of Valencia and Sagunto. Every day 6000 lorries enter and leave the port, and this figure will increase as the exapnsion progresses.”

In addition, “the imminent commercialisation of the ‘Zal of Valencia and the ‘Parc Sagunt II’, which will be signed next week, from the sale of our site of 280.000 m2 to Tempe / Inditex. The future development of the Parc Sagunt II. The Cantabrian – Mediterranean corridor and the intermodal terminal at Fuente San Luis next to the port. “ Finally he explained the challenge. “The Ministry the Port ADIF the Regional Government and the City Council should go ahead with what should become the most important goods terminal in the Valencian region. It is also important that we participate in the new goods terminal of Vicálvaro; and that for this we are trying to mobilise 2000 million euros of public and private investment.”