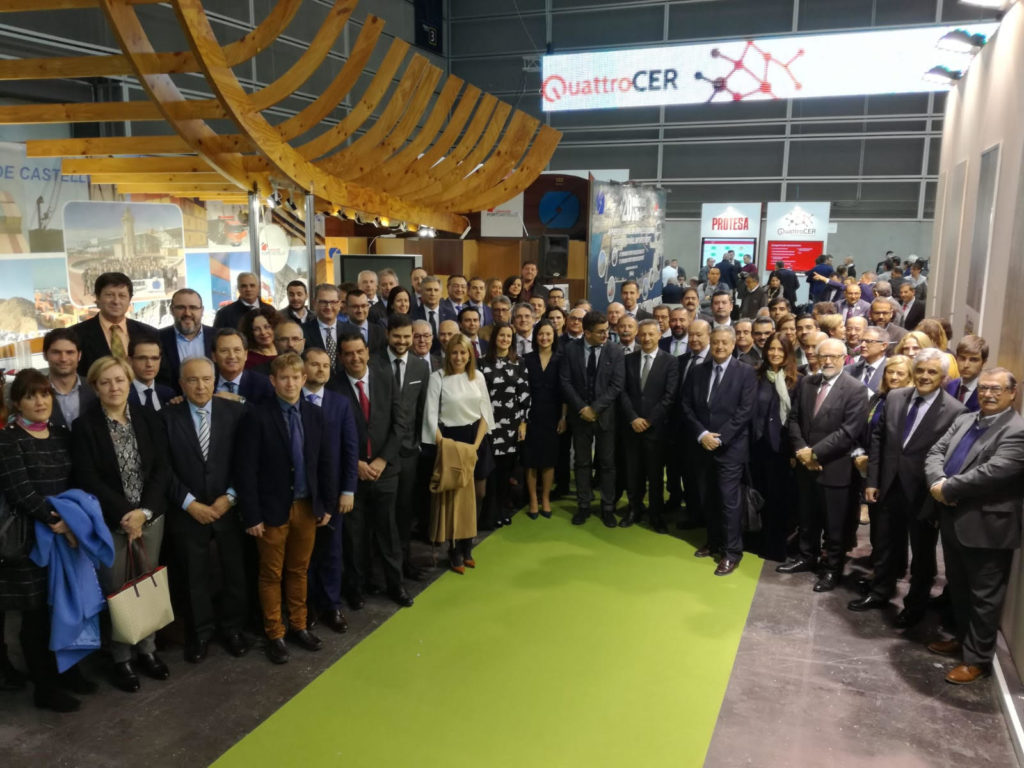 Ceramics traffic makes up 36.7%of the the total traffic at the port of Castellón

PortCastelló gains maritime market share in the exports of ceramics which has grown 12.8%.

The port of Castellón is attending the annual ceramics fair of Cevisama once again to present the implicit alliance between the ceramics sector and PortCastelló and to demonstrate its potential to make the sector more competitive through its offer for export, import and as a logistics centre. In an event held at the PortCastelló stand attended by more than a hundred people The president of the Port Authority of Castellón, Francisco Toledo said, “CEVISAMA gives us the opportunity to make contact with shipping companies, importers and exporters and set up new commercial relationships, evaluate existing contacts and make improvements where possible”

Francisco Toledo highlighted that 2018 has been a record breaking year for PortCastelló. The figure for total goods traffic was the highest in the port’s history 21.137.629 tons, 18% more than the previous year.

The figure for solid bulks was also a record: 7.425.415 tons, 14,9% more than in 2017, which situated Castellón as the fourth most important port for this type of traffic, since these material are fundamentally the raw material for the ceramics industry.

There was also a record for Ceramics traffic which makes up 36.7% of the total traffic of PortCastelló, making it automatically the most important port for ceramics. More specifically, in 2018 7.7 million tons of materials connected to the ceramics industry was moved through the Port of Castellón, 8.3% more than in 2017. The import of raw materilas went up to 5.2 million tons, 6.7%more than in 2017 and exports reached 2.5 million tons an increase of 12.8% over 2017.

This increase in exports form PortCastelló, much higher than global exports, means that the port has increased its market share of the maritime export sector, the result of improvements in competitiveness

Thanks to the ceramics sector PortCastelló occupies high positions in the ranking of the 46 ports that make up the Spanish ports system. In fact PortCastelló is in fifth place behind the big four ports in Spain in terms of in terms of exports/imports.

“For this reason we are together with the ceramics industry at one of its most important trade fairs, both CEVISAMA in January and CERSAIE in September, to demonstrate our offer of services which favour competitiveness for the ceramics sector.” Toledo explained.

This year various new things are being presented at the PortCastelló stand at CEVISAMA . On one hand PortCastelló will lower tariffs for the third year in a row, in this case by 10% on the goods tariff and 5% for the ships tariff. “This will place amongst the ports with the lowest charges, “said Toledo. And he added that the port would continue with its policy of bonuses for the ceramics sector.

At the same time, this year will see the start of the works to improvement the railway connections of the port which will continue next year with the construction of the new intermodal station which “will be essential for the ceramics export sector.”

Lastly “we wish to advertise our offer of land in the port area for logistics purposes, both in the south basic and in the three million square metres which makes up the logistics/industrial area around the Port of Castellón.” Toledo explained.

Francisco Toledo also highlighted in his presentation the investments being made in the three bulk solids terminals amounting to 68,9 million euros, “which will allow us to gain in efficiency, effectiveness, sustainability and environmental protection.”

Francisco Toledo stated that “PortCastelló is very competitive in the ceramics sector both in imports and exports to countries with which we have regular lines operating: Mediterranean countries, the Black Sea, the Red Sea, East and West Afrca and the Persian Gulf.