PortCastelló closes 2018 with an increase of 14,1% in profits which reach nearly 11 million euros 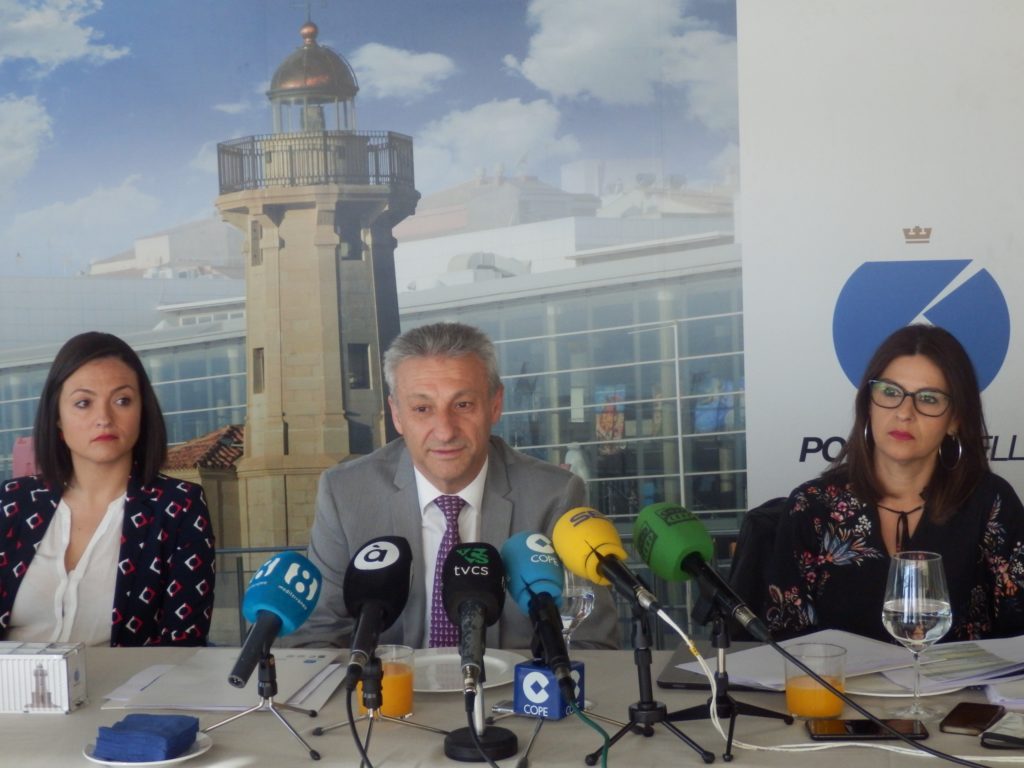 Investments made by the Port Authority have increased 474% in the last four years.

In the Spanish Ports System, the port of Castellón has shown the second highest growth in goods traffic in 2018.

These profits are the result of the growth in income by 9% – going above 30 million euros – and the contention of costs which rose only 7.8%, reaching nearly 11 million euros.

In vestments made by the Port Authority of Castellón have multiplied 5.6 times in four years and have increased 474%, going from 3.1 million euros in 2015 to 17.4 million in 2019. This information was made public by the president of the Port Authority Francisco Toledo, accompanied by the managing director of the port Ana Ulloa, and the Head of the Financial Management Department, Maritina Vidal, at a press conference.

In addition, PortCastelló closes the year breaking other records. A new record for goods traffic, moving 21.137.629 tons, which is 18% more than in 2017 and a higher than average growth rate which is 3.3%. With these figures PortCastelló is now positioned in 9th place in the Spanish Ports System, and is the port with the second highest growth in traffic in 2018 of the 46 general ports.

More specifically, the port of Castellón goes up to fourth place in solid bulks traffic, handling 7.425.415 tons, an increase of 14.9%. In fact it is the part with the highest growth rate in this type of traffic.

PortCastelló has also made new records for the number of vessels that have stopped at the port in 2018: a total of 1.854, which is a growth of 8,7%. There is also a record in T GT (volume) of vessels: 28.971.459, 16,9% more, which means that the Port of Castellón has processed more vessels, of greater size and carrying more cargo, thus gaining in efficiency.

The President of the Port Authority of Castellón has indicated that with these figures the port of Castellón has made three significant achievements: a better financial result, higher levels of goods traffic and higher income.

In addition, Francisco Toledo informed the media that 2019 in the year ‘to sow for the future’, as he referred to the three factors which will enable PortCastelló to more competitive and at the same time more sustainable. On the one hand, by generating greater resources the port of Castellón is able to continue its policy of offering more bonuses while reducing tariffs. “Specifically vessels tariffs will go down 5% and goods tariffs 10%”

At the same time, 2019 will the year the PortCastelló becomes better connected, given that the project to construct a new rail access will be finalized and the the construction of a new intermodal station will be adjudicated.

Lastly, Toledo affirmed that private investment, in the three solid bulks terminals –TMG, Noatum and PortSur- to a value of 68´9 million euros will mean, “gaining in efficiency, effectiveness, environmental protection and sustainability. These investments will triple current capacity and will revolutionise solid bulks operations and will make it possible to attract new traffic which we don’t have right now.”

“This productive infrastructure will place us in a better competitive position will generate more employment and new opportunities.

The President of the Port Authority of Castellón explained the foundations on which he will continue to base his management policy; “connectivity and the development of intermodal capacity, the development of a logistics and industrial area measuring 3 million square metres around the port; specific actions to promote relations between the port and the town in collaboration with the the Town Council of Castellón, efficiency and sustainability.”