PortCastelló will host the II Escala a Castelló 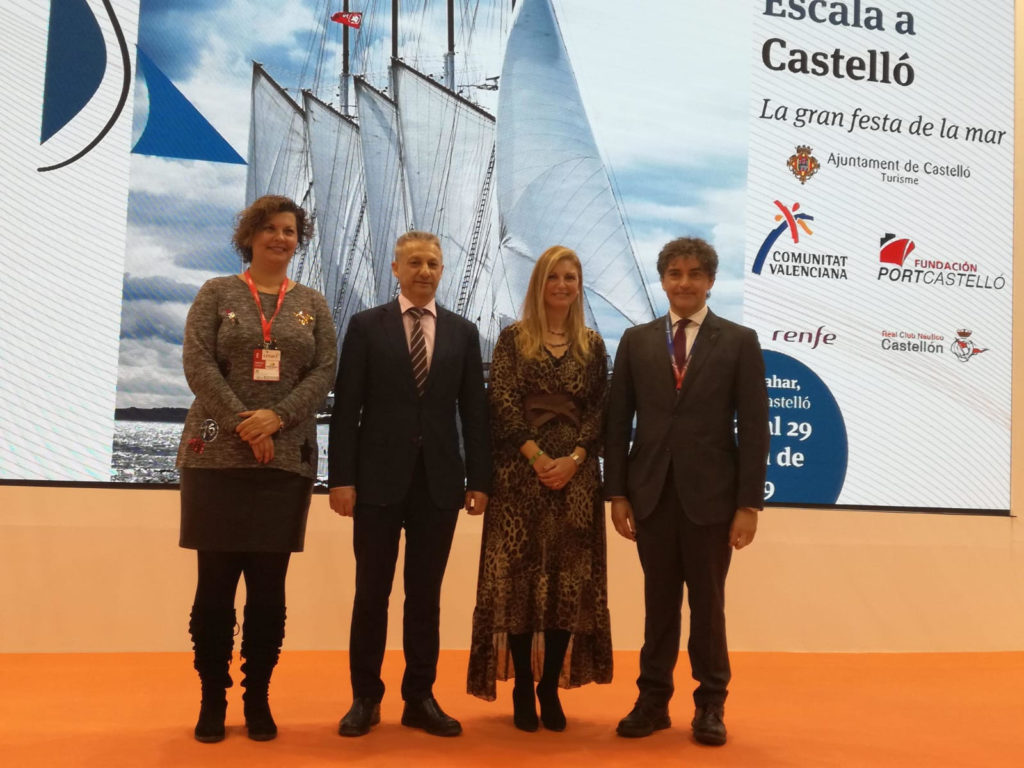 Francisco Toledo has highlighted that ‘ the port opens to the town in a unique event thanks to the Town Council of Castellón and the Valencian Region Tourism Agency.’

The International Tourism Fair FITUR has been the venue where new features of the II Escala a Castelló have been presented, an event which will be held from the 25th to the 29th of April in the port of Castellón. It has been organized by the Town Council of Castellón and the the Valencian Region Tourism Agency together with the Port Authority of Castellón and last year attracted more than 75,000 people.

The president of the Port Authority, Francisco Toledo, has congratulated the Escala de Castelló team, “for setting up an innovative event, which was even more successful than expected the first year and we are convinced that it will go from strength to strength in the future.” “The Port not only has a duty to collaborate but an obligation to take part in a festival of maritime traditions which is a way of strengthening the tourist industry and diversifying the economy of Castellón.” He added. “With this event the port opens itself upto the city.

For her part the Mayoress of Castellón, Amparo Marco, pointed out that the the second edition of this event has double the budget of the first and “has the clear objective of becoming the most important maritime fair in Spain.”

Marco emphasised that the Escala a Castelló “is the most important tourist event that has been held in the city that makes it stand out form the rest with a unique event which has put us on the map both nationally and internationally in an unprecedented way.” In the same vein, the Secretary for the Valencian Region Tourism, Francesc Colomer, spoke of how “the Escala a Castelló has been a great success, the result of courage and foresight in the field of tourism. The Escala a Castelló is here to stay.”

The great attraction during the II Escala a Castelló will be the Santa María Manuela, a cod fishing vessel 64 metres long which will sail from Lisbon especially in order to participate.

The Galeón Andalucía, 46 metres long, will be present once again after being such a success last year and will certainly together with the Santa María Manuela, get most attention from the visitors. Another new feature is the participation of the Spanish Navy which will send one of its larger (ocean going) patrol vessels, the ‘Tarifa’ nearly 70 metres long which allows it enough room for a helipad on deck. Its duties include protecting Spanish fishing vessels when they are working in international waters. Below deck there is even an operating theatre.

Another important attraction this year will be an exhibition of nautical jousting, which consists of combats, like the medieval ones on horseback, but carried out on boats propelled by a team of rowers and the ‘knight’ sitting on the bow with lances trying to knock his opponent into the water. Quite a spectacle, accompanied by traditional music which visitors will be able to enjoy on Saturday the 29th of April in the evening, for the first night combat and on Sunday 28th April in the morning. Marco said she was convinced that this would be one of the most popular features of this year’s event.

Another spectacular attraction will be static hot air balloons which the organizers hope will make the event even more attractive and help to bring in more than the 75,000 visitors of last year.

Apart from these novelties, visitors will be able to visit a fishing vessel to learn more about the fishing techniques, and also a sea rescue vessel, a Guardia Civil patrol boat and ‘latina’ sailing boats, as well as a other traditional craft.

The organizers have emphasised the contribution of the Castellón Yacht Club as they will be organising activities for younger visitors, such as gymkhanas, workshops for children, exhibitions and other activities.

The sea market is another important feature, especially as this year it will be more traditional in character by including artisans and traditional craftsmen.