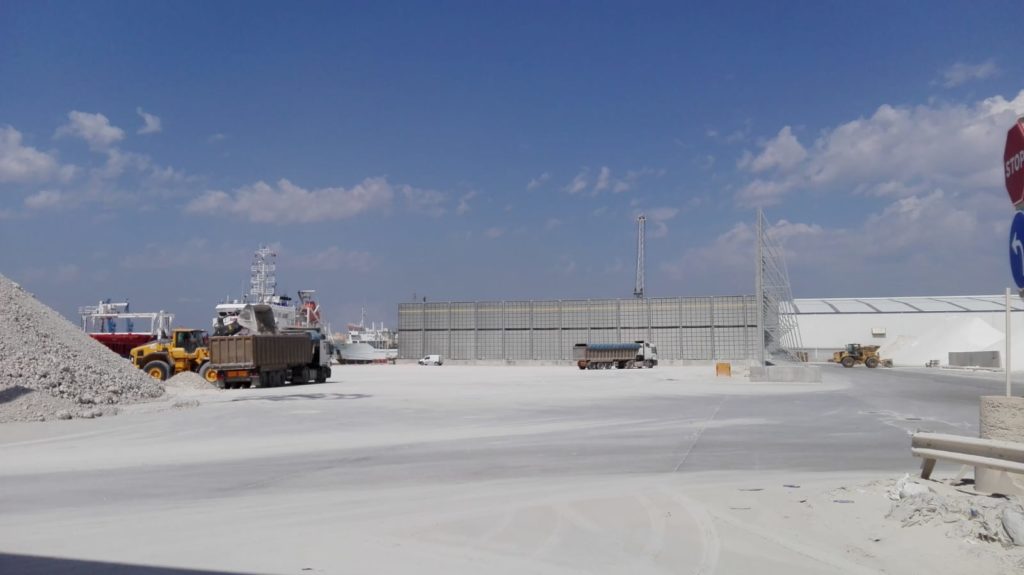 The Institute of Technology Ceramics certifies that they reduce significantly the dispersion of particles PM10The Institute of Ceramic Technology of Castellón has measured the efficiency of anti-dust screens installed by the Port Authority of Castellón to protect the Grao de Castellón from dust particles derived from the loading and unloading of solid bulks in the port area. This first analysis was carried out on the screen located on the outer transverse pier of PortCastelló.

The efficiency has been defined as the percentage of PM10 (particles with a diameter less than 10 μm) retained by the screen, so that an efficiency of 100% would indicate that the screen retains all the PM10 emitted. In addition, it has been determined under the different meteorological scenarios identified as most representative of the study area. The study observes that the conditions of wind speed and direction, together with the height and distance of the collection to the screen, significantly affect the efficiency achieved.

That is, considering the emission focus at different heights and distances from the screen, it captures an average of 25% of the particles emitted, “which is a good result that amply justifies the investment”, explained the president of the Authority Port of Castellón, Francisco Toledo. Efficiency can reach up to 50% with low and near-screen emission sources. In addition, the ITC concludes that there is a noticeable effect when the screen is downwind  even at great distances, over 200 meters, especially in terms of PM10 concentrations.

The study also analyzed the efficiency of the screens when the material deposits are located in the opposite part of the one where the wind comes from. In this case, the anti-dust screen reduces the wind speed and favors the deposition of the particles in suspension and therefore improves the quality of the air.

The Port Authority of Castellón has placed a total of three anti-dust screens in the port: one in the Transversal Exterior pier, another in the Cerámica dock, and the third in the south basin. Altogether, 650,000 euros have been invested in their acquisition, and they are monitored and evaluated by the Institute of Ceramic Technology. For this, ITC has defined an experimental methodology at the field level to determine the typical environmental conditions in the area and the deposition speeds on the screens.

PortCastelló has recently presented its 18 environmental protection actions, including measures to minimize the emission of particles due to truck traffic, the installation of wheel washers in the exit lanes of the Cerámica dock to stop particles being dragged outside of the port, as well as the installation of pollution meters, the readings of which may be known in real time through the PortCastelló web portal.

A specific sustainability section has been opened at www.portcastello.com, in which the 2017 and 2018 reports have already been published certifying that the port’s emission levels “not only comply with current legislation, but also they are well below the legally permitted maximum, “said Francisco Toledo. “However, the Port Authority is working to adopt the best environmental practices in order to lower the emission levels even more”.

Lastly, the Port Authority of Castellón has granted a concession for the ceramic quay to two solid bulk terminals. This decision, already approved by the Board of Directors of PortCastelló, means the introduction new developments in the handling of solid bulks and will provide a highlevel of environmental protection.