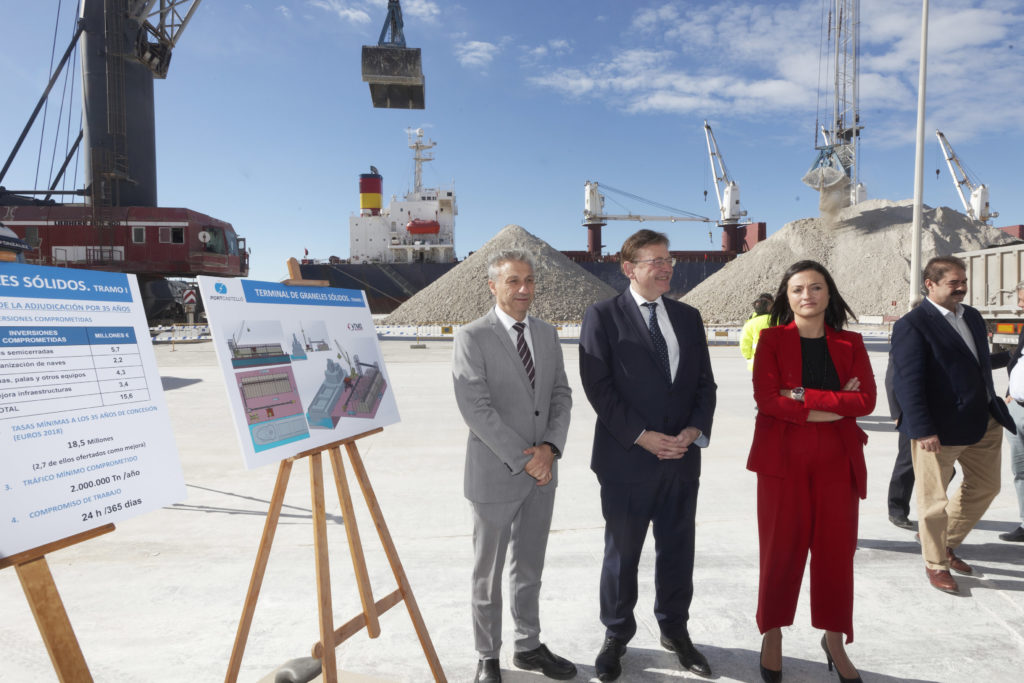 The president of the Generalitat visits the ‘ Muelle de la Cerámica’ to learn more at first hand about measures to protect the environment.

The President of the Generalitat Valenciana, Ximo Puig, held a meeting this morning with the President of the Port Authority of Castellón, Francisco Toledo, and his management team, in which he highlighted that the work that has been done at PortCastelló to make it the fourth most profitable port in the Spanish ports system since 2017 and the port with the second highest traffic growth rate, 15.5%, in 2018.

The president of the Generalitat praised the investments that have been made by the Port Authority since Francisco Toledo became president, which have multiplied by a factor of five, going from 3.1 million euros in 2015 to the current figure of 15 million euros.

During the meeting information was presented about the ambitious Productive Investment Plan which aims at spending 150 million euros over the next few years and which will be mainly dedicated to improving land access to the port with the construction of a new road and rail connections as well as the construction of an intermodal station “which will become a reality in 2021 and will allow us to expand our hinterland” commented Toledo.

The president of the Generalitat referred to “the new impulse which the Port of Castellón has been given and which has seen it become the centre of new investments and opportunities for the economy of Castellón.” He also underlined the “great strength” of PortCastelló and the efforts made to “reinforce the connections between the port and the town.”

Ximo Puig got to see at first hand the measures which have been put in place by the Port Authority of Castellón to gain in efficiency, effectiveness, sustainability and environmental protection. He visited the Muelle de la Cerámica, where it has been decided to make two new concessions under the condition that investment will be made in high performance methods of cargo handling and dock space use. The first concession will be operated by TMG with an investment of 15.6 million euros and a commitment to handle 2 million tons per year. Adjudication of the second concession will be made shortly.

Francisco Toledo stated that, “these concession mark a turning point in bulk solids operations, because they reward the care of the environment and gain in efficiency by tripling the capacity of these terminals, given that they will be operating 24/7.” Refering to the ceramics sector the president of the Port Authority gave an assurance that “this will reduce the time ships have to wait and spend in port which means that the out clients will save money”

Lastly, Francisco Toledo referred to the return of Customs Service to the port as well as the conversion of the the building that was formally the ‘Comandancia de Marina’ to become an arts centre and ports Museum of the Sea.