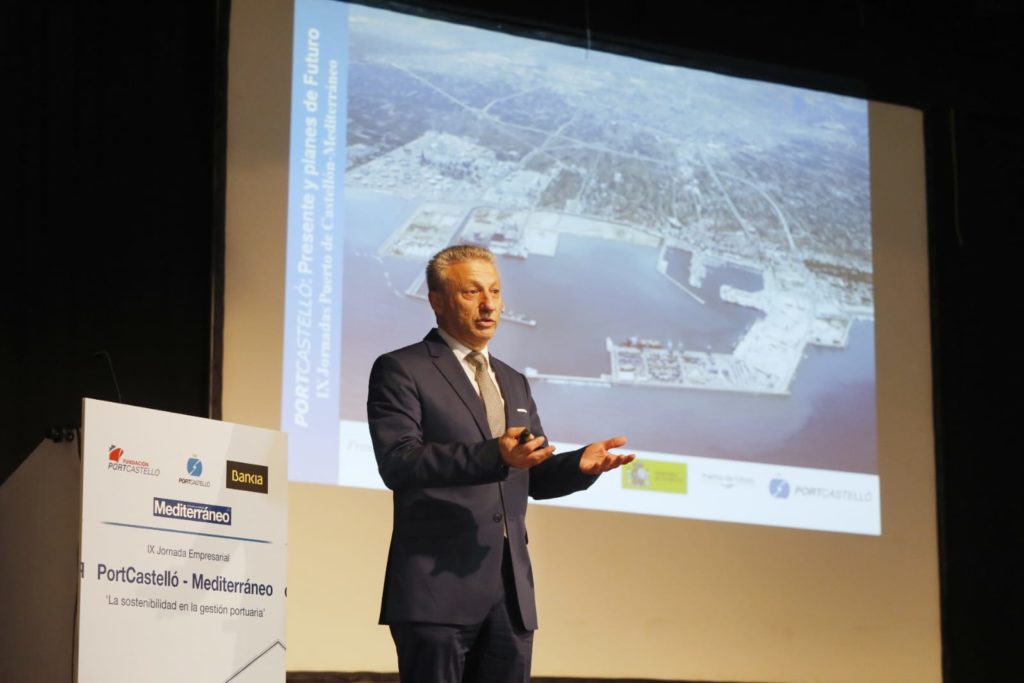 The Port of Castellón has succeeded in mobilising 73 million euros of private investment.

Income has increased by 2 million euros between January and October this year, an 8.6% increase compared to last year.

These figures place the port of Castellón in the first place of Spanish ports in terms of the rate of growth. So far this year the accumulated growth in total traffic is 15.5%, five times more than the average growth in the Spanish ports system. This has meant that PortCastelló has risen from tenth to ninth place in terms of total traffic and consolidates is position in fourth place with regards to the traffic of solid bulks.

These results were made public today by the president of the PortAuthority of Castellón, Francisco Toledo, during the IX Conference of PortCastelló-Mediterranean Businesses, which was attended by the Minister for Public Works ,José Luis Ábalos, and the President of the Valencian Region , Ximo Puig. With the current data the port of Castellón will close 2018 exceeding the figure of 20 million tons of traffic, which is the objective set out in the company plan for 2022.

The president of the Port Authority underlined the fact that PortCastelló has the second fastest growth among the 46 general interest Spanish ports in 2018, a rate of 15.5% compared to the average of 3.1%.

In addition, the economic results area testament to the effective management of PortCastelló income has increased by 2 million euros between January and October of this year, which is 8.6% more than last year, and this in spite of having reduced tariffs on goods by 10%, this being the main source of income. Francisco Toledo pointed out that,”This has been possible thanks to the good work done by the port community and its companies. Our objective is to continue improving our ability to compete and our sustainability working together with all those whose efforts have made this excellent figures possible.”

The commitment of the private sector to PortCastelló and the public investments scheduled to be made, guarantee a solid and sustainable future for PortCastelló. On one hand, 73 million euros of private investment has been attracted which means that the facilities for handling solid bulks will be modernised through the concessions, as well as extending the dock front thanks to a new dock in the south basin. Infrastructure and machinery will also be improved.

At the same time, it should be remembered that a total of 157 million euros of public funds, has been approved by State Ports and the Port Authority in its company plan to be spent of productive infrastructure, which will essentially allow big improvements in connections by land, especially by railway.

The area for logistics and industry and the intermodal station situated near the port of Castellón, Francisco Toledo said, “will without doubt become a centre for new growth and a great attraction for new investments and thus generated more employment.

Francisco Toledo also affirmed that 2019 would see the customs office return to to the port of Castellón and the reopening of the Comandancia Marina building.

For her part the managing director of the port of Castellón, Ana Ulloa, offered to the those attending the conference the concept of ‘Crecimiento Azul’ (Blue Growth) put forward by the European Commission in 2012 which focuses on key areas and the those with key roles. After summarising the first steps taken by the Commission to put into practice this instrument for marine and maritime planning, she gave some examples of initiatives and projects related to the ‘Economia Azul’ (Blue Economy) in various European coastal regions. Finally she described the current opportunities offered by ‘Crecimiento Azul’ and an outline of how these could be taken advantage of by the Port Community of Castellón.

Josep Vicent Boira, the Government Commissioner for the Mediterranean corridor, explained the advantages that the the rail corridors will bring to PortCastelló.

The conference closed with a round table discussion which discussed “the environmental sustainability of ports” which was lead by the head of the management department of the ort Authority of Castellón, Maritina Vidal and in which the following people participated; Obdulio Serrano, head of the department of Sustainability at the Port Authority of Castellón, Maria Jose Rubio, and Eliseo Monfort from the Institute of Ceramics Technology.