Toledo presents the case for the cantabrian-mediterranean corridor 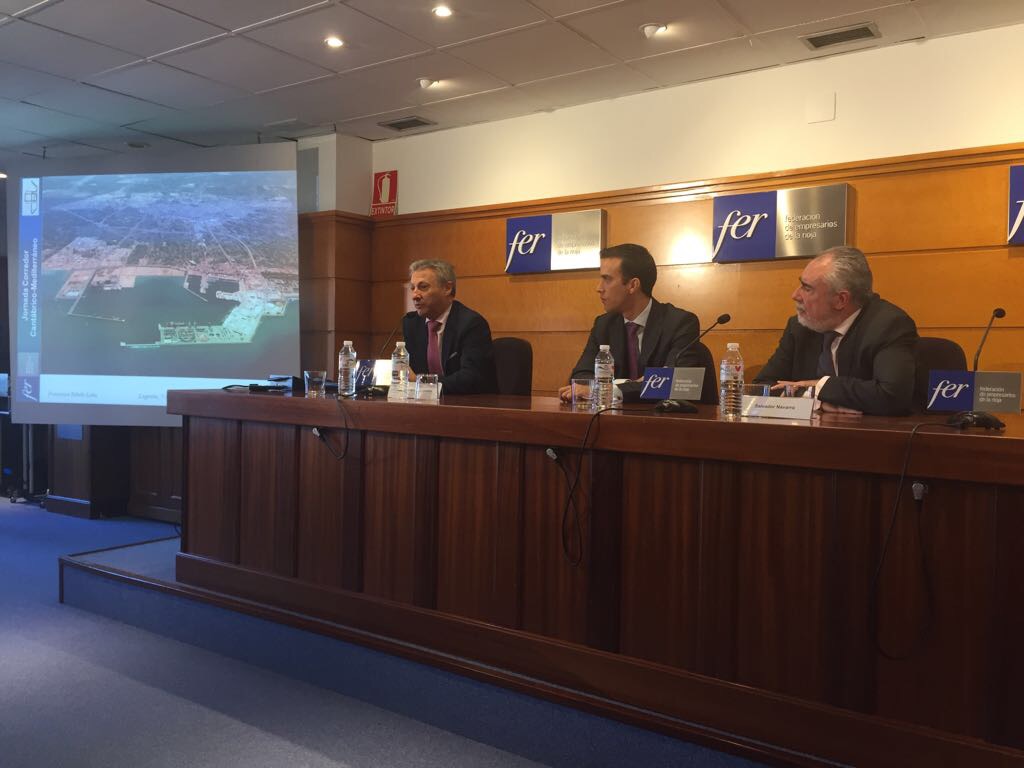 The president of the Port Authority of Castellón, Francisco Toledo, is taking part in two business conferences in La Rioja and Pamplona, organized by the Confederación Empresarial Valenciana, together with Confederación de Empresarios de Navarra and the Federación de Empresarios de la Rioja. The objective is to make the case for the Cantabrian – Mediterranean corridor on which PortCastelló is due to spend 37 million euros.

Toledo stated that,”ports play an essential role in the transport of goods by rail.” In fact, 80% of Spanish imports and 60 % of exports go through these ports,”and most of this traffic has to be transported to and away from the ports by rail.”

“The Cantabrian -Mediterranean corridor is vital because it makes it possible to connect the ports on the Cantabrian coast with those situated in the Mediterranean in the Valencian Region and provided a competitive alternative to the connection by sea.” In addition, Francisco Toledo recalled that Bilbao and PortCastelló have the experience of the weekly train that has connected the two ports over the last few years, but “this train has to go via Tarragona and go 100 kilometres further than it would if it went via Teruel, but this latter alternative  cannot be available until the line has been modernised.” For this reason, and now that the Ministry has announced that in the future Castellón and Tarragona will only be connected by  international gauge track, it is essential to open this route so that trains with Iberian gauge will be able to go directly from Valencia to Bilbao.”

Francisco Toledo stated that establishing the Cantabrian-Mediterranean and Mediterranean corridors is essential if Spain is going to reach quotas of goods transported by rail equivalent to the average in Europe.”There has to be a firm commitment to this policy and those ports like ours which enjoy good locations, stand to gain a lot, because by 2020 we could become one of the best connected ports in the Spanish ports system.”

To those attending the conference, Toledo presented the latest data about PortCastello which place it in the top 10 of the 46 general ports in Spain and the third most profitable. More specifically, the port of Castellón holds the fourth position in solid bulks, fifth in import/export, seventh in liquid bulks and containers and ninth in general goods,all of which demonstrates the level of diversification that the port has achieved.

The Cantabrian-Mediterranean railway connection has a potential demand of between 48 and 54 trains per week in one direction which could transport a million tons of goods or 100,000 TEUs per year. These estimates are the result of a study sponsored by Valencian business organization CEV, in collaboration with the Port Authorities of Castellón and Valencia. Toledo summed up the situation by saying,” a properly prepared Cantabrian-Mediterranean corridor would connect PortCastelló to the Zaragoza  logistics platform, the most important in Spain, as well as the Cantabrian coast. This in turn would allow us to gain more import and export traffic and increase the use of the planned intermodal station.”