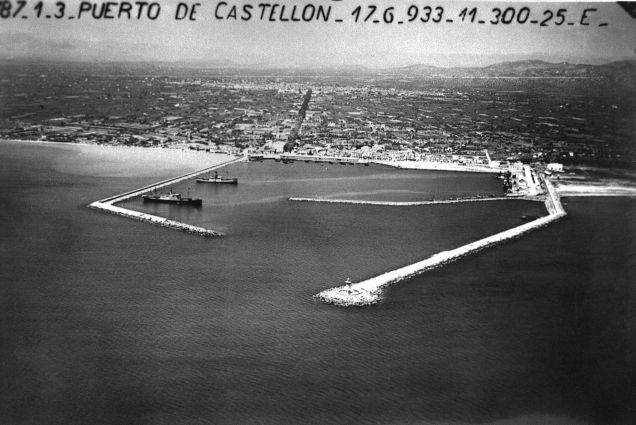 The Port Authority has organized an exhibition in the Moruno Building about the 100 year history of the lighthouse on the Muelle de Costa.

Unpublished photos, century old plans, books, inventories, manuscripts, and marine signalling equipment all form a part of this exhibition entitled, ‘One Hundred Years of Light’, which the Port Authority of Castellón will inaugurate on the 2nd of November in order to commemorate the one hundred years history of the lighthouse on the Muelle de Costa.

This is a unique exhibition which brings together for the first time materials and documents which have been preserved in the archives of the Port Authority and which will be laid out so that the people of El Grau and Castellón may learn about the history of the lighthouse.

Those who are interested will be able to see for example the original plans made in 1915 by José Serrano, then engineer-director of the Board of Works of the port, for a lighthouse situated at the end of the Levante breakwater. The initial project was later modified so that the lighthouse would be equipped with a light set 15.60 metres above the level of the sea  and which would have a range of 13 miles. ,

Visitors will also be able to view original estimates, such as those prepared when the the end of the Levante breakwater was damaged in a storm in 1926. The total cost was 9,638 pesetas and 63 cents.

The service logs, listing consumables, orders, accounts and communication registers are also in the exhibition, as well the corresponding weather records.

Lastly, an exhibition of photographs has been prepared which show the construction of the lighthouse with material from the  “ l´Abeller”  quarry in Borriol.

Instruments are also on display such as a substitute light, reflectors for the regulation of the light intervals and the desk on which the plans were prepared and surveying instruments. All the equipment needed for the construction of the lighthouse was prepared in Spain except the optic components. It was the first lighthouse to be constructed in this way and was built by a company called ‘La Maquinista Valenciana. ‘

The first trials with the light were carried out on the 16th of July 1916 and a few days later it came into service. The staff who were appointed to run the lighthouse became a part of the Board. The first lighthouse keeper was

Francisco Alegre Fabregat. Subsequently in January 1922 an electric light was installed with a range of 22 miles.

And so after many years we can celebrate a hundred years of light. The exhibition pays homage to all the lighthouse keepers whose names have been recovered for the archives of the Port Authority and are listed in the exhibition. They worked in difficult conditions. especially those who were sent to the lighthouse on the Columbretes Islands

The exhibition has been organized by Gerard Llansola and Carmen Esteve, from the Port Authority of Castellón and will remain open in the Moruna building from the 2nd to the 30th of November: Mondays to Fridays 1700 to 2100 hours. Weekends and public holidays 12:00 to 14:00 and  17:00 to 21:00 hours.