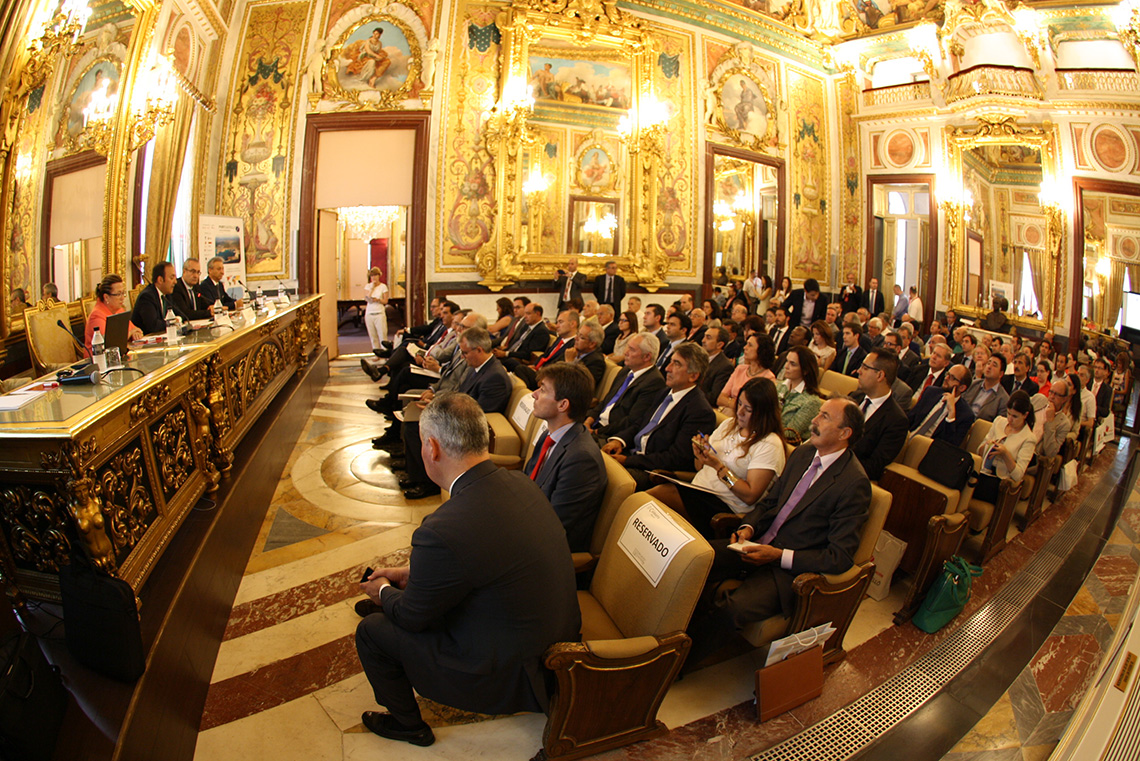 With its connections in the Mediterranean, Africa, the Middle East and the Black Sea, the port of Castellón presents a very competitve option for businesses in Madrid

More than 150 companies have been informed about the the infrastructure of the port and its potential for growth thanks to the 2 million square metres  of land available in the South Basin.

The port of Castellón has met with representitives of embassies and more than 150 national and international businesses from the Madrid area at the Palacete de Santoña of the Chamber of Commerce of Madrid in an event organised by the PortCastelló Foundation to inform them of the advantages of operating from the the port of Castellón.

The geostrategic location of the port of Castellón makes it the gateway to the Mediteranean, Africa, the Middle East and the Black Sea through a large number of regular lines and it is connected to all continents by other lines. It is also connected to the Mediterranean corridor, to the Ebro valley and the centre of the Peninsula. This was explained by the President of the Port Authority of Castellón, Francisco Toledo, who presented data to show to  the business sector of Madrid that the port of Castellón is one of the most competitive ports in the country. It holds fifth place in import/export traffic and one of the fastest growth rates among ports in the Spanish system. “Castellón is the port of opportunity for Madrid,” he said.

PortCastelló came to the Chamber of Commerce in Madrid today with an economic balance sheet making it the sixth most profitable port in Spain and with an increase in net profit of 54.4 % compared to 2014.  Francisco Toledo laid out in detail the Productive Investment Plan for the port of Castellón with a budget of nearly 70 million euros until 2020 which will allow the port to consolidate its position in the top ten of Spanish ports.

Among the most important infrastructure already planned is the railway conection between the northern and southern areas of the port, a dual carriage way connection to the South Basin, an intermodal station and a rail connection to the Mediterranean corridor.

Without doubt the urbanization of 2 million square metres in the South Basin is one of the most attractive investment opportunites at PortCastelló for companies involved in logistics and transport.

PortCastelló explained to the amply represented business sector of Madrid its system of bonuses and reductions as well as its efforts to protect the environment in order to consolidate its position as a sustainable port.

The event was attended by the Managing Director of Port Authority of Castellón, Roberto Arzo and the Manager of the PortCastelló Foundation, Miguel Rojo and was opened by the president of the Chamber of Commerce of Castellón, Lola Guillamón.

José Llorca highlighted the 16 million tons of goods moved through the port of Castellón in 2015 and the excellent connections the port has with the Mediteranean, Africa, the Middle East and the Black Sea. He said, “The port of Castellón has all the characteristics necessary to make it attractive to businesses in Madrid.” Llorca assured the audience that State Ports has made a  committment  to improving the connective infrastructure of the port and “for this reason we continue to work towards the achievement of the connection to the Mediterranean Corridor which will allow the port to continue to grow.”

The president of the Chamber of Commerce of Castellón, Lola Guillamón, addressed the business community to remind them “of the enormous help that the Port of Castellón has been to our companies since it has provided them with the resources they need be able to compete in equal conditions with others. ”